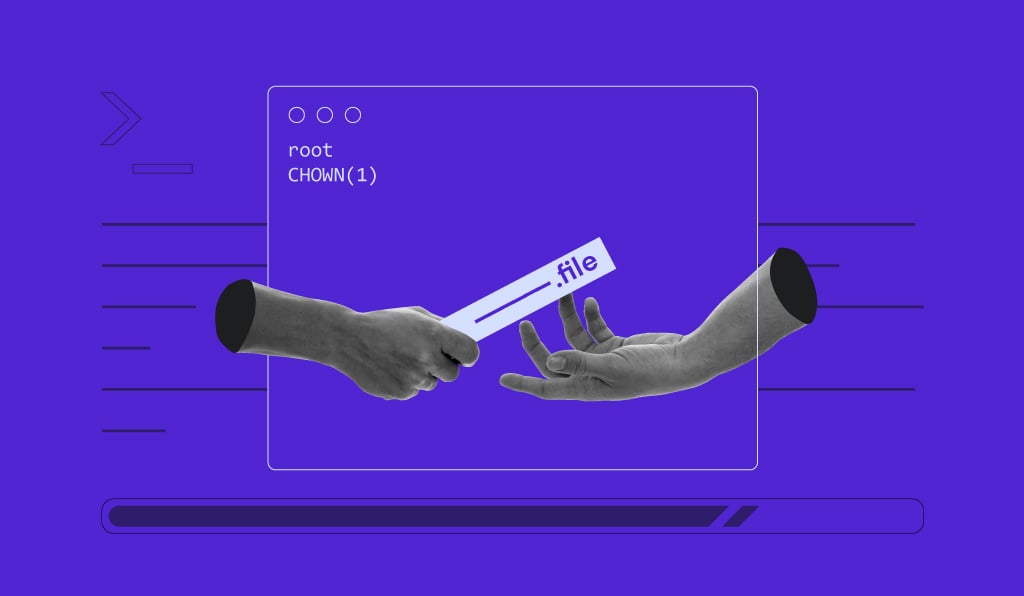 Managing file and directory ownership is essential when working with Linux operating systems on a virtual private server. The correct use of the chown command can prevent unwanted users from making changes to your files and help secure them from outsiders.

This tutorial will contain a complete overview of the chown command and discuss how to use it.

Linux comes with a unique permission system divided into three parts: user, group, and other permissions. Check out the comparison below:

These three groups have their permissions indicated by the rwx logic like, as shown below:

r stands for read, w for write, and x for execute. In the example above, the owner has read, write, and execute permissions. The group can read and execute, while others can only execute.

Users can easily change ownership and permissions on a VPS with the help of the command line.

The main command for changing ownership is chown. It allows users to change user and group ownership both for files and for directories. We’ll go over the chown syntax below:

How to Check the Current File Ownership

Before using the chown command, confirm user and group permissions. For that, log in to your VPS using SSH and switch to the required directory with the cd command.

For instance, if the file is in /home/Hostinger, go there by using the following command:

For this tutorial, we have created a file called chownSample.txt. The output of the ls command is:

The first -rw-r–r– part represents the file permissions for user, group, and others. The user Hostinger is indicated as the file owner, while the group ownership is set to root.

How to Change the Owner of a File

To change the file owner, the basic syntax of the command is:

We’ll change the ownership of chownSample.txt from Hostinger to another user named newowner. A sample of this command is shown below:

To verify the change of ownership, use the ls -l command again. This will produce the following output:

How to Edit Group Ownership

For example, set the owner as newowner and group as newownergroup for the same chownSample.txt file with this command:

To verify the change of ownership and group, use ls -l.

If you only need to change the group, the ownership part can be skipped. For example, the full command to change only the group to newownergroup would look like this:

How to Change Directory Ownership

Chown can also be applied to directories. In this example, we’ll work with a directory named TestPermissions. First, let’s use the ls -l command to view its permissions.

The first drwxr-xr-x part represents the user, group, and other folder permissions. The user Hostinger is the directory owner, while the group ownership is set to root.

Similar to files, the owner and group can be easily changed for directories. For example, this command will set the user newowner as the owner of the TestPermissions directory:

To change the group alone, use:

To change the owner and group of the directory, use:

The same command can also set the permissions for multiple files or directories. The syntax for such a command would look like this:

Here’s how to set newowner as the owner and newownergroup as the group for the TestPermissions directory along with the chownSample.txt file inside:

How to Use Recursive Chown

Recursive chown is useful if you want to change the permissions for all the sub-directories and files inside a directory.

For a recursive operation, use the -R flag. Here’s an example:

We’ll take the same TestPermissions directory and set newowner as its owner recursively:

Now, every file and folder inside the TestPermissions directory will be owned by the user newowner.

How to Edit the Owner of a Symbolic Link

Symlink or symbolic link is a reference to an existing physical file. It can also be considered an advanced shortcut, like the ones used on Windows.

The chown command can be used to change the owner and group of symbolic links. First, create a symbolic link for the file chownSample.txt.

To verify the ownership and group information, use the ls -l command. This will produce the following output:

There are two entries available – one for the physical file, and the other for the symbolic link. Now, try changing the owner to newowner for the newly created symlink:

The above command will change the ownership for the file chownSample.txt. Now, this will be the ls -l command’s output:

If you want to change the symbolic link’s ownership, use the -h flag:

As can be seen, the ownership of the symbolic link has been updated.

If you want to manage the ownership of your Linux files or directories, use the chown command. It will allow you to assign different owners and specify the groups for various files and directories.

In this tutorial, we’ve covered the syntax of the chown command and learned how to:

We’ve also provided some examples that you can use when trying out the chown command. If you have any questions or comments, let us know below.

Ignas takes great satisfaction in helping people tackle even the most complex technical issues. His current goal is to write easy-to-follow articles so that these issues will not happen at all. During his free time, Ignas likes to play video games and fix up things around his house.